Kilt Twister is born from the tales of an ancient Pictish Mead / Ale. The Picts were an ancient people who predated the Kelts in what is now the Highlands of Scotland. These people lived off the land dwelling in caves and brewed their famous mead from Honey / Heather and later added Hops to preserve it.

Fresh Heather and Hops, grown here on the farm, are added to pure water and Wildflower honey to create this dry, beer like mead.  Unique to this vintage, the addition of Dark Wildflower Honey has added a brandy like finish and oak ageing has smoothed out the flavour.

From Bonny Bells of Heather"They brewed a drink longsne,Was sweeter far than honey;Was stronger far than wine, They brewed it and they drank it, And lay in a blessed swoon; For days and days together, In their dwellings underground"

There is an ancient Legend that goes something like this….

The Picts brewed a mead that was famed for It's flavour but even more for It's ability to give strength and bravery for war. The Kelts wanted this recipe very badly. After the Kelts attacked the Picts there were only two Picts left. A great Pict warrior and his young son. The King of the Kelts told the warrior that if he gave him the recipe he would not kill his son. Unknown to the warrior his son was already dead. The warrior said to the King, let us walk together and discuss this more. As they walked to the edge of a high cliff, the Pict Warrior hurled himself and the Keltic King with him over the cliff and the recipe was lost forever.

Many people struggle with how to pair meads with foods. In our case, this is easy. Our meads are more wine like and tend to be on the dryer side. Most popular with the holiday meal are either Melomel or Metheglin.  All our dry meads pair easily with poultry, fish, and cheeses.

MELOMEL is a fruit meads and pair well with spicy foods, seafood, poultry, and cream pasta. Our HARVEST MELOMEL is a berry fruit mead with a crisp acidity that makes it excellent with many foods. It is difficult to pair most fruit meads with red meat and our WICKED MISTRESS MELOMEL pairs well with pork, lamb, and lighter red meats. It gets paired with smoked meats and cheeses as well by many restaurants.

METHEGLIN is a straight honey mead with spice or herbs. Our SOLSTICE METHEGLIN is made with ginger and spice. It pairs well with the whole festive turkey meal at holidays but is surprisingly versatile. It is excellent with spicy foods because there is enough sweetness to hold up to the spice. The ginger makes it a nice pairing for salmon and other seafoods or Asian and Indian cuisine. It is one of the few beverages that is nice with either sweet or spicy curries. Our KILT TWISTER MEAD is made with fresh hops and heather from our farm.  It is dry and still and pairs well anywhere you would put a nice craft beer.

CISER is a cider made with honey but also a mead made with apples.  Our ORIGINAL SIN CYSER MEAD is made with a blend of apples and quince from our farm.  It is dry and still like wine but has a refreshing cider taste.  It pairs well with Curry, Pork, and is excellent on the patio with summer BBQ.

SAC MEAD or sweet mead is very good with dessert . Our VINTAGE SAC is a sweet mead that pairs especially well with creamy desserts but is also excellent with fruit and cheese. It is fortified and is therefore somewhat similar to a white port. Our MAD MARION is similar to a very smooth tawny port with berry top notes.  It pairs well with chocolate desserts, cheese plates, or as an aperitif.

Who could resist with a name like Kilt twister? This is the first time trying mead & it's a crowd favourite. It's subtly sweet, full of flavour & destinctly original. I found it was best served room temp and on it's own. Everybody got a bottle for Christmas because who could gatekeep this delicious secret!? 10/10 would recommend. 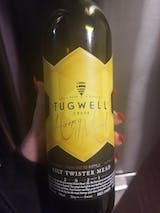